Добавлено спустя 4 минуты 58 секунд:
On October 15-16, 2021 we played the largest Art of Napoleonics battle so far. Finally, I got around to publishing a battle report.
There were 5 players playing 2 vs 3 on my custom made hex mapboards. On Napoleon’s side there were the French (Alex aka General Lusignan) and the Saxons (my son Kolyan). The opposite team consisted of the Austrians (myself), Wurttembergers (my nephew Viktor, 12 y.o.), and Bavarians (my nephew Max, 11 y.o.).

Here are the starting positions: 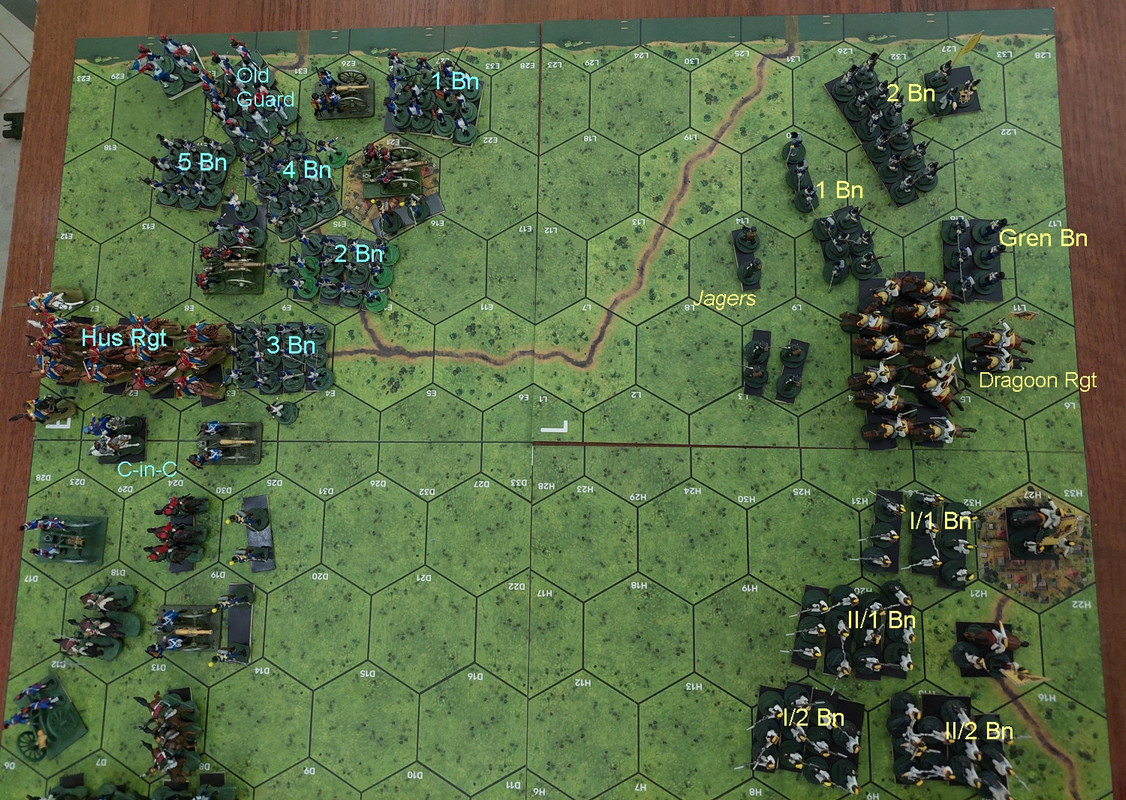 The preliminary (and rather vague) plans of the sides were as following:

Добавлено спустя 25 минут 41 секунду:
Video of the first gun shots of the game.

Saxons and Bavarians chose to engage in a frontal fight. The Austrians planned to quickly occupy the village and the grove beside it with light infantry, then wait for the bulk of the French army to storm the village and strike it to the open flank together with the Wurttembergers.

But the French instead rolled a massive frontal attack on the Wurttembergers while trying to intercept Austrian Grenzers and Jäger with a heavy cavalry regiment before they take the village.

The Austrians sent two their reserve dragoon squadrons to deep flanking off-board marches – one per each flank. They should emerge on the battlefield at the end of Turn 6. The French decided to bring their reserve (a hussar squadron and a line battalion) to the front on Turn 3 right in the center.

Video at the end of Turn 1.

End of Turn 1 on the right flank: 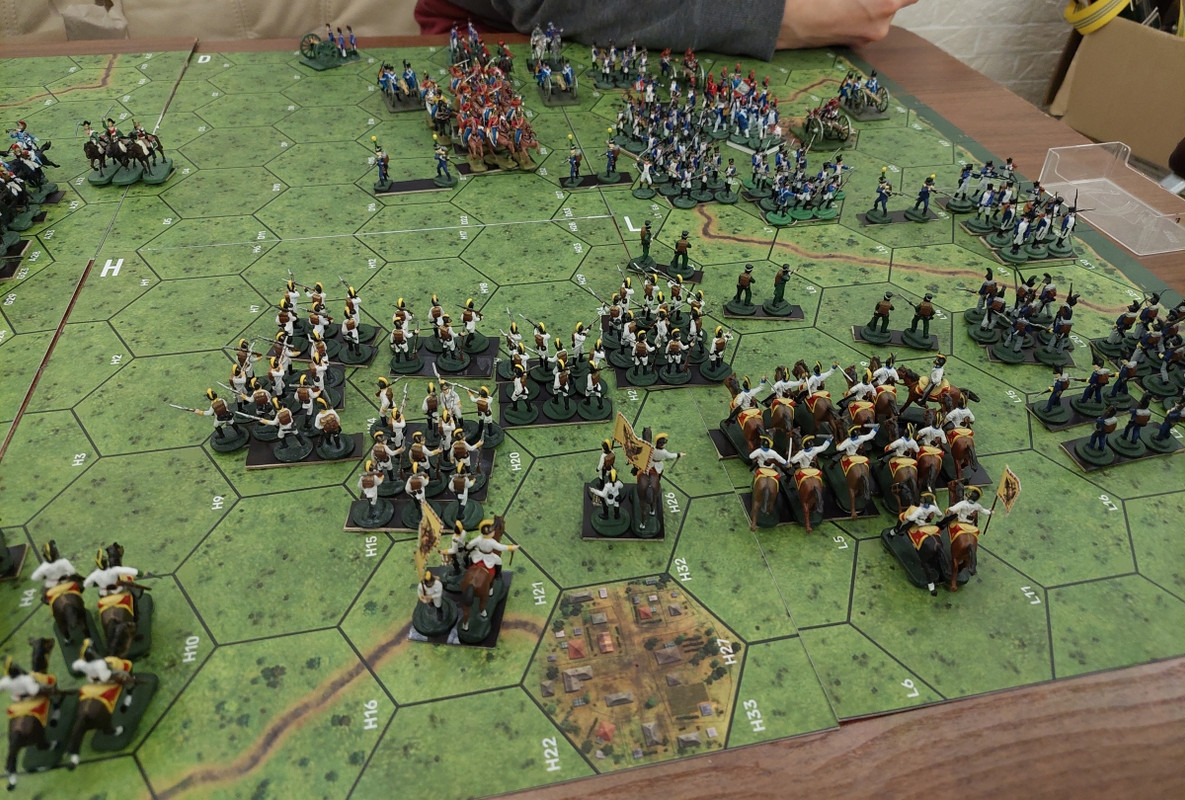 Добавлено спустя 1 минуту 10 секунд:
At the left flank, the battle started rather harsh for the Bavarians: they lost an artillery duel and their gun pair was pinned down (video of this artillery duel).
The Bavarian commander immediately requested reinforcements from the Austrian center and received them: first an entire infantry regiment (the one in shakos), then two Landwehr battalions. It helped Bavarians reverse the situation.
Although the opposing sides on this flank possessed only light cavalry, they opted for cavalry charges very soon, at Turn 2. Here’s video where Bavarian Chevauxlegers were ordered to charge at their Saxon counterparts, but didn’t get a chance to as the latter charged themselves – at an Austrian infantry battalion (here’s the video).
In the center French heavy cavalry started chasing down Austrian skirmishers in the open but five companies made it to the village and the light woods.
On the right flank another tight frontal struggle was rolling. The French were pressing so hard on the Austro-German troops that the latter have to call for their dragoon regiment to against the spearhead of the French offensive. After some fierce fighting, by the end of Turn 1 only one figure was left from the entire Austrian mounted regiment here…

Добавлено спустя 10 минут 46 секунд:
In the center, French Horse carabineers made a bold charge in the very midst of the Austrian ranks but were soon repulsed by the Cuirassier Regiment: 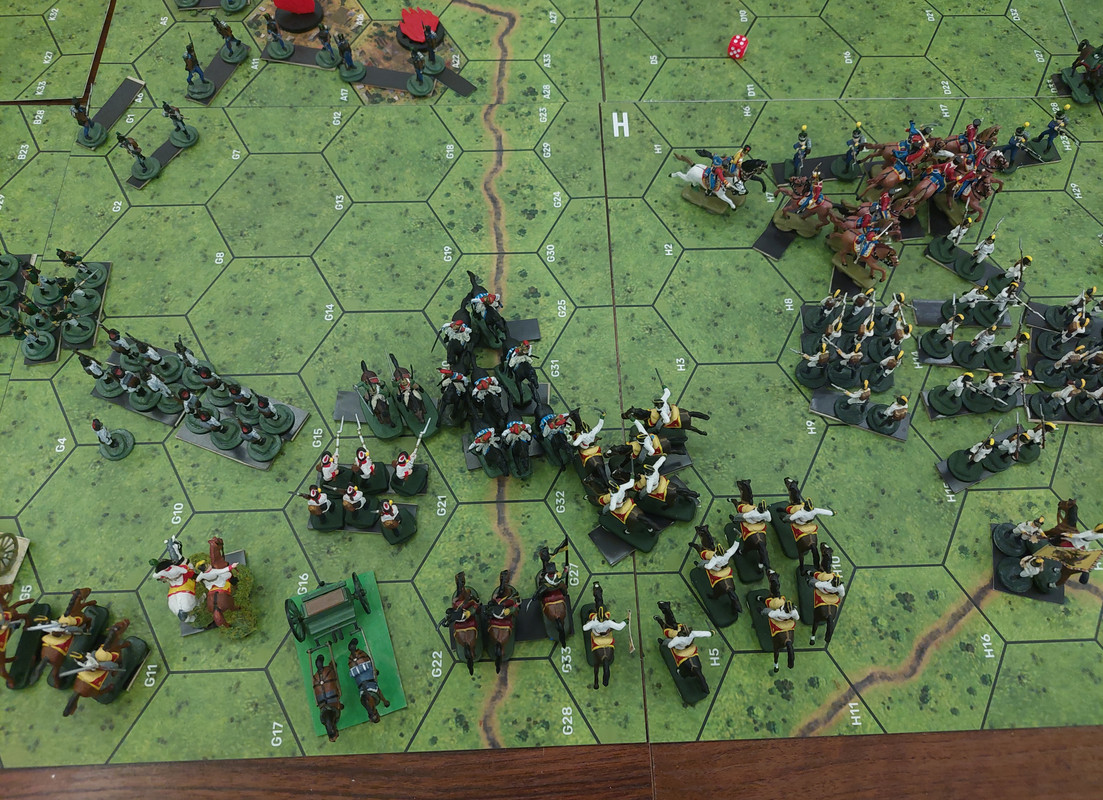 Meanwhile, French howitzers have set the village on fire and Austrian skirmishers had to leave it.
On the flanks, the situations remained uncertain.

Добавлено спустя 1 минуту 49 секунд:
At the End of Turn 6 Austrian reserve dragoons arrived on both flanks of the battlefield:

Saxons met the Austrian flanking march with a firing line that managed to shoot down the whole squadron on the next turn: 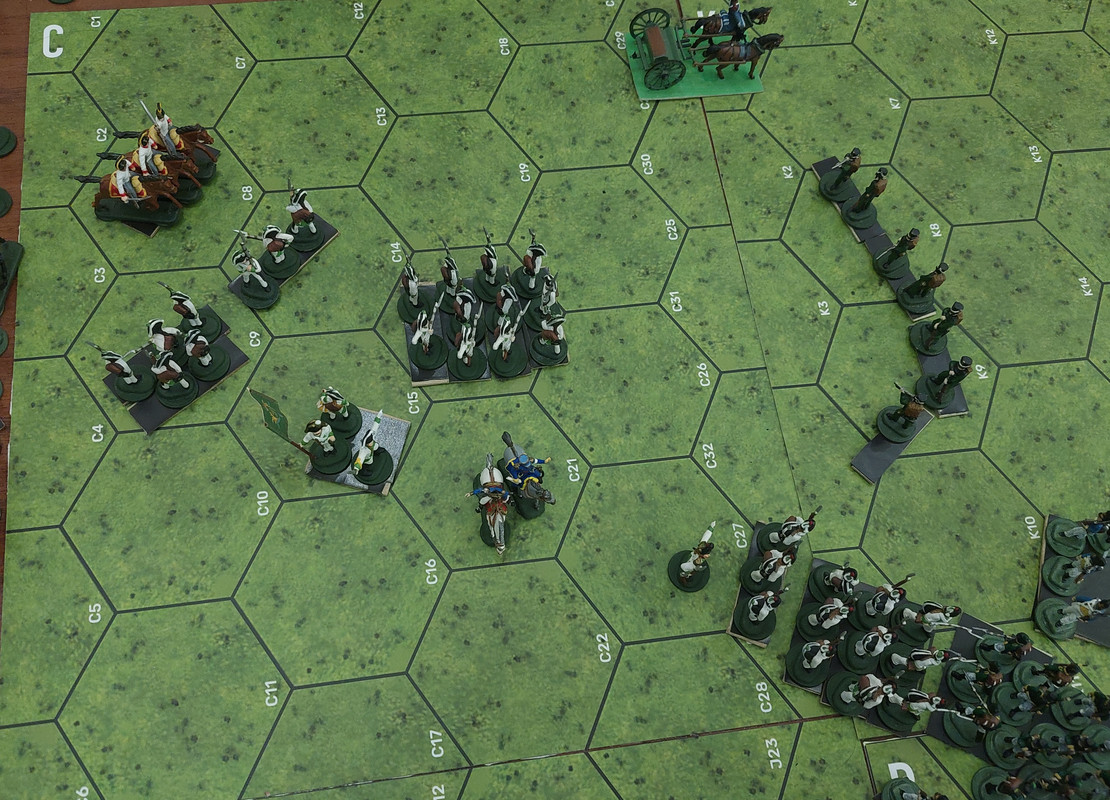 It was the last turn of this game day. General Lusignan had to return home, and the game continued next day without him, Kolyan assuming the joint command.

Добавлено спустя 1 минуту 54 секунды:
October, 16
Austro-German alliance was pressing home its offensive on the second day, and the battle situation for the French was slowly but surely deteriorating.
Austrians and Bavarians almost surrounded and routed the remnants of the Saxons: 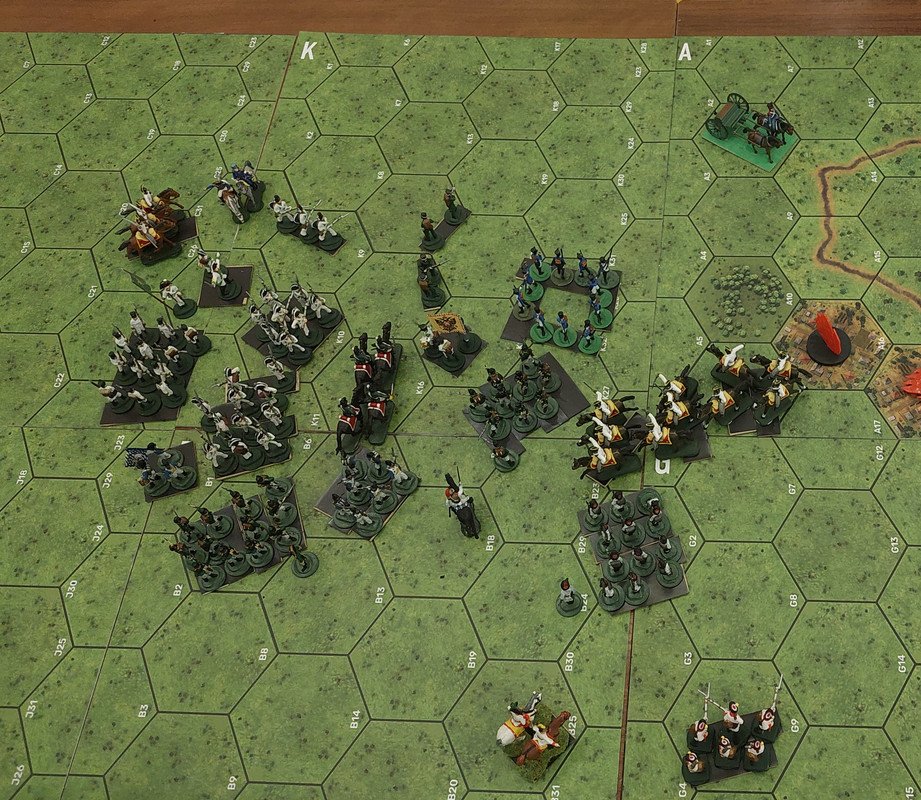 Добавлено спустя 1 минуту 47 секунд:
On the other flank, the French were holding on but even the Napoleon’s escort was thrown into battle — Guard Chasseurs a Cheval with 2 figures left in the squadron charged the Austrian dragoons:

Meanwhile, the Austrian cuirassiers broke the French center and started annihilating French artillery. There was an interesting case when French 4-pounders failed a canister shot at the cuirassiers – they rolled “1” with -1 die modifier and inflicted no casualties: 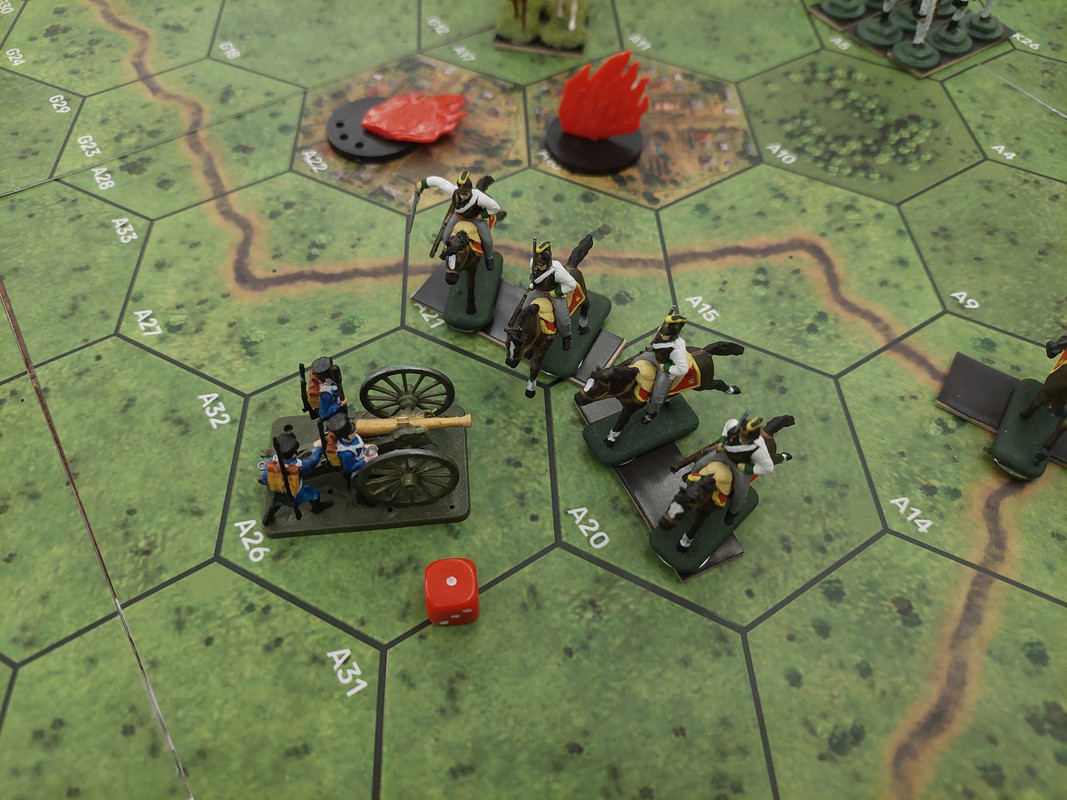 After Turn 12 we decided to finish the game due to the obvious advantage of the Austro-German alliance. Although Napoleon was still resisting on the right flank: 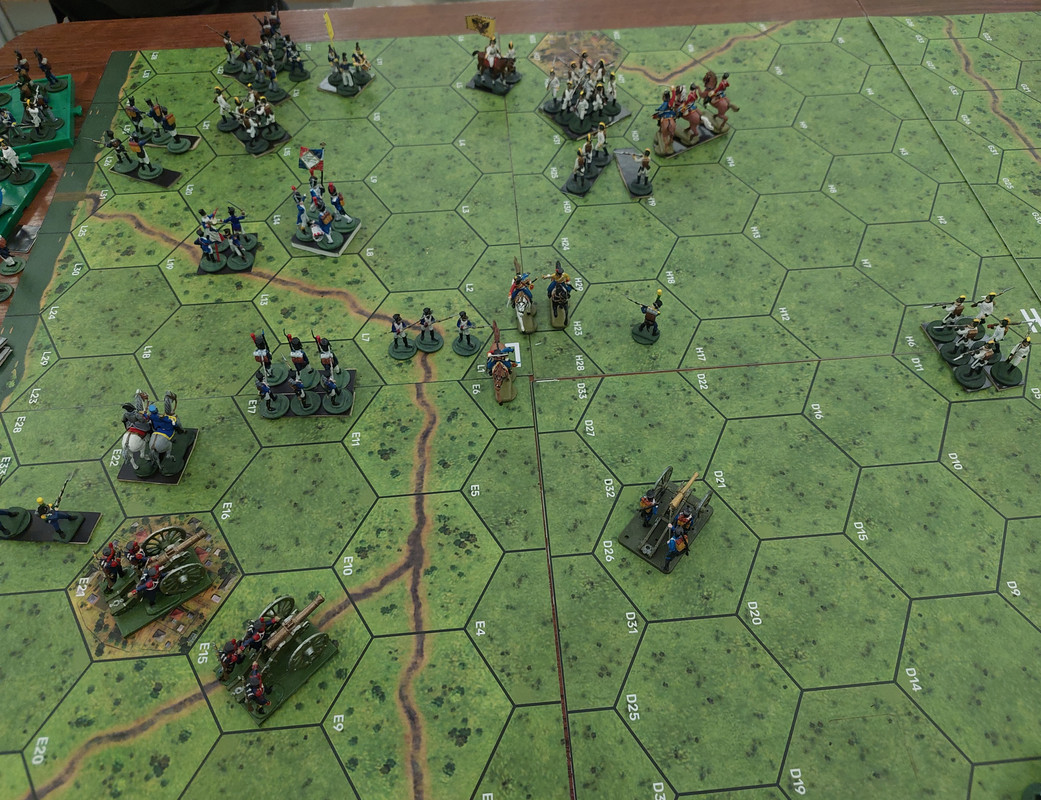 So ended this two-day game that lasted about 5 hours in total.

Добавлено спустя 16 минут 11 секунд:
My impressions: the gameplay was captivating and close enough to reality, the rules are playable, some adjustments to the rules came to my mind after this battle.
Setting up the game takes about one hour, but getting everything back in place took really much time :) The table had been occupied with the mapboards and the armies for several days more, and we played one more battle with my son later on.
https://art-of-tactic.blogspot.com 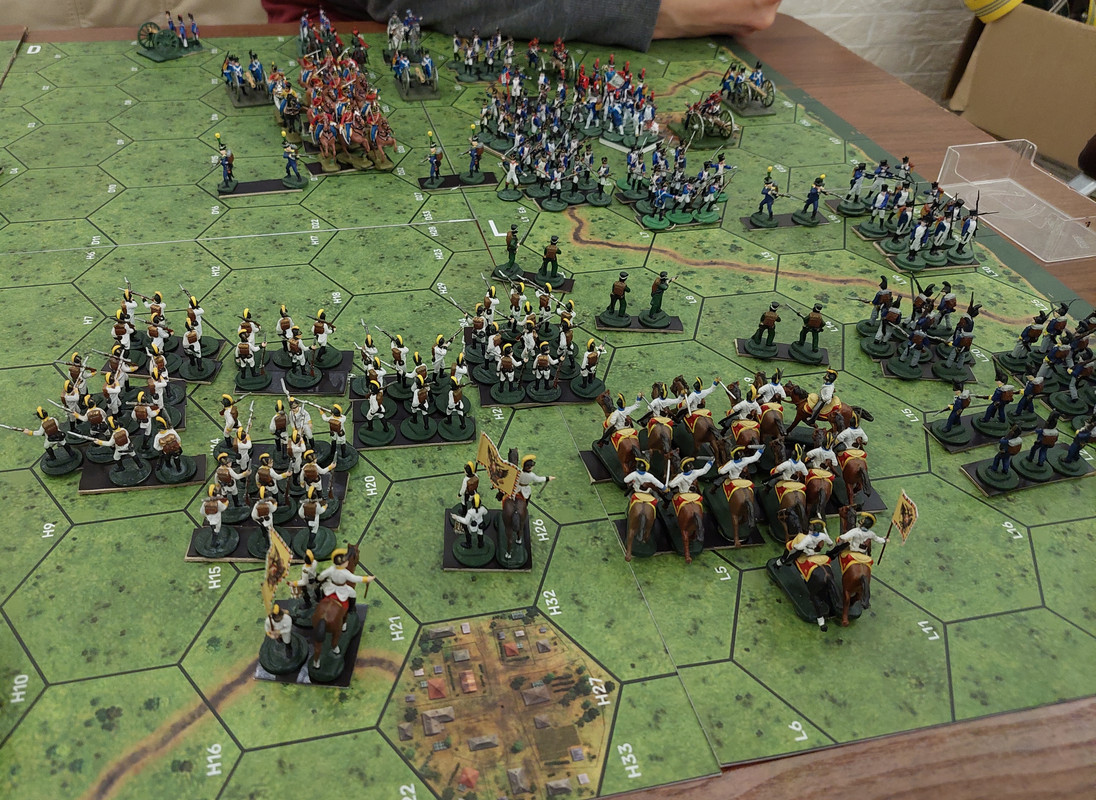